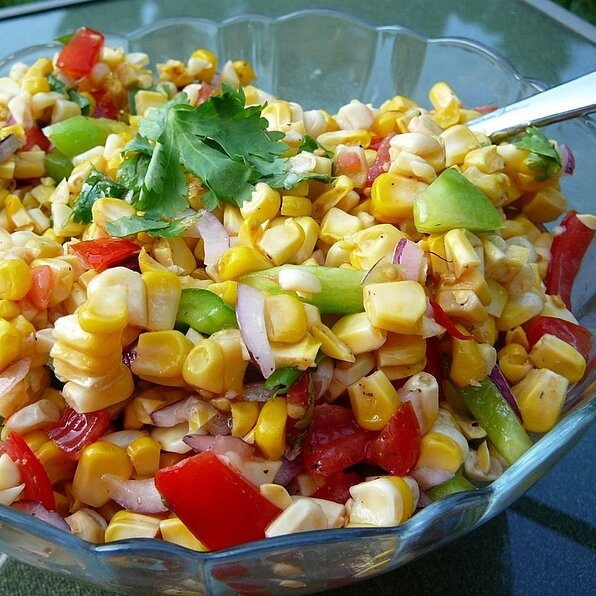 Grilled Corn Salad is a colorful salad chockful of crunchy, fresh veggies. It features grilled corn on the cob, a warm-weather favorite! It’s a terrific side dish for a barbeque because the corn is prepared right on the grill alongside the proteins.

But if you don’t need or want to fire up your grill, you can still enjoy this salad–you can roast the corn in the oven!  The only difference is that you will leave the husks on the corn. The husk traps the steam so the corn cooks in its own moisture.

No matter how you prepare this salad, it keeps well in the refrigerator so it’s also great for meal prep.

Recipe inspired by one from Allrecipes
Makes 6 servings

1) In a large bowl, Combine the peppers, tomato, onion and cilantro. Add the olive oil and vinegar; toss until evenly mixed. Set aside while preparing the corn.

2) Remove the corn from the grill or oven and set aside until just cool enough to easily handle. Remove the husks/silks if needed. Stand each cob upright in a wide, shallow bowl and slice the kernels off from top to bottom using a sharp knife.

3) Add the warm corn kernels to the bowl of mixed vegetables. Season with salt and pepper; toss until evenly mixed.

4) Allow the Grilled Corn Salad to sit for about 10 minutes for the flavors to blend. Taste and add more oil, vinegar, salt, or pepper if needed, then serve.

Joe Carabase is a fitness expert, lecturer, entrepreneur, and the author of
Get UnStuck Today: The 90 Day Journal To Get Out Of Your Head & Into A Better Body